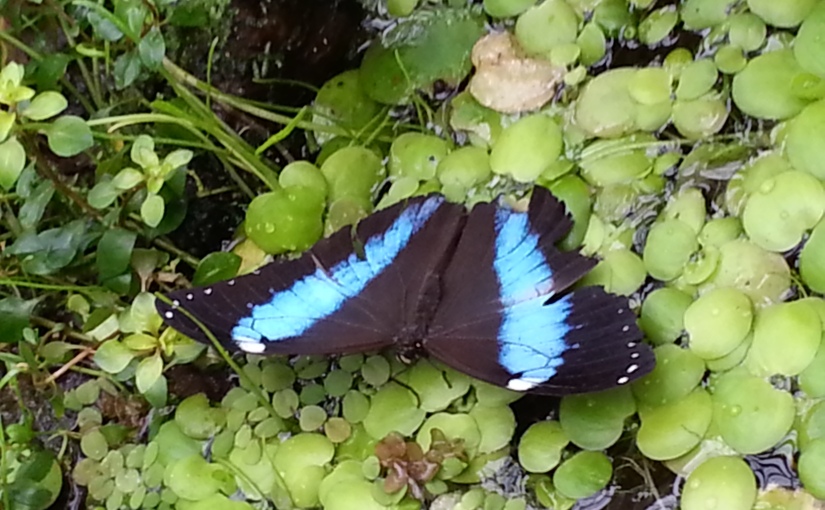 The photo above took me more than half an hour of patience at the Botanischer Garten in Munich.

But I do believe it was worthwhile waiting for the butterfly to settle down. (Oh, I just noticed the alliteration and the pun : www.) The biology expert talking to the visitors explained that these butterflies have about three weeks to procreate and then settle down forever. Naturally, they are ‘flutterier’ (is that a word at all?) than other animals who have a longer average lifespan.

Patience is a prerequisite to a happy life. If any of you has ever read M. Ibrahim et les Fleurs du Coran (Éric-Emmanuel Schmitt, 2001),  you will know the quote on page 71:

If you look mire closely at the wings’ edges of the blue and black butterfly    (oh dear, another one:  bbb), you can tell that some butterflies tear their delicate wings in the netting as they frantically flutter to and fro (fff! can’t help it!).

In our everyday humdrum lives it is not always easy to do or to practice, but one should always try it with patience.  Some Asian cultures have Buddha as a symbol (for complacency also?) or the lotus flower, which Yoga-lovers like imitating when they sit cross-legged on the floor. Some people enjoy cooking in their kitchenette or sailing around the world in a tiny nutshell.  Some love music (farewell, Sir Simon Rattle! what a fantastic concert in Berlin last night) or love dancing, like I do.  Some soft-spoken ones adore the “sound of silence”, like up on the mountain tops or diving to the ocean’s depths or even going to churches at Evensong, like St. Paul’s, London (eternal thanks to Sir Christopher Wren) silently savoring Gregorian-like chants and German hymns (I wonder which colleague of mine asked them to do us that favor?)

Our current Pope Francis, age 81 in 2018, is a fanal for us Christians. If you really believe in the saying “You should practice what you preach“, then you can easily identify with his lectures and precepts. My rule of thumb is, as he says, if you don’t act according to what you profess to believe in, then you are neither trustworthy nor credible. Exactly like “The Boy who cried ‘Wolf!‘ “.  A façade – phenomenon which is actually quite sad. People you cannot trust do not have many friends, that is a fact.

I am sure many of us cheered Melania on when she recently corrected her husband’s course on U.S. immigration policy and splitting up families. In this instance, Melania reminds me  of Catherine Parr:

It is thought that her actions as regent, together with her strength of character and noted dignity, and later religious convictions, greatly influenced her stepdaughter Lady Elizabeth (the future Elizabeth I of England).[18]

Catherine or ‘Katheryn the Quene KP’  (1512[1] – 7 September 1548)  was the last of Henry VIII ‘s six wives. She was also the one who suggested he become the founder of several Colleges in his old age :

He was an avid gambler and dice player, and excelled at sports, especially jousting, hunting, and real tennis. He was known for his strong defense of conventional Christian piety.[6]  The King was involved in the original construction and improvement of several significant buildings, including Nonsuch Palace,  King’s College Chapel, Cambridge and Westminster Abbey in London.  Many of the existing buildings Henry improved were properties confiscated from Wolsey, such as Christ Church, Oxford; Hampton Court Palace;  the Palace of Whitehall; and  Trinity College, Cambridge. (source: https://en.wikipedia.org/wiki/Henry_VIII_of_England#Marriage_to_Catherine_Parr, accessed 06/24/2018) 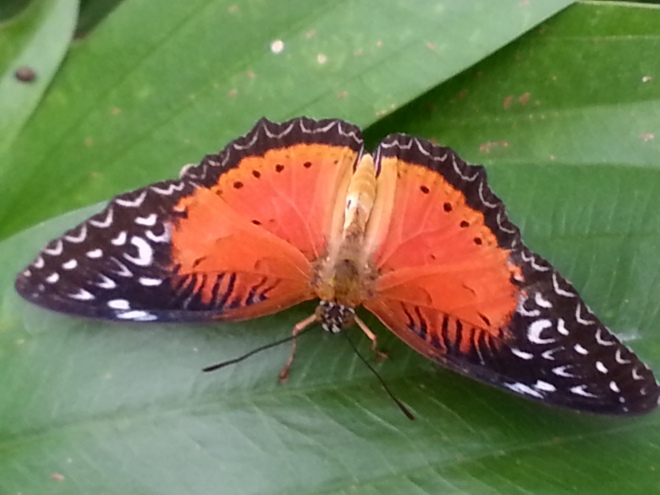 So, once again, we are remembered by our deeds, those deeds which help others get ahead, by showing patience, courage, love and generosity. Now doesn’t that remind us of another loving wife and philanthropist, Bill Gates’ Melinda? Just look at all those wonderful things they have been doing with the money accrued over his comparatively short business life. Truly amazing and inspiring. Another instance of love and patience.

Love and patience will save the day, your day, carpe diem!